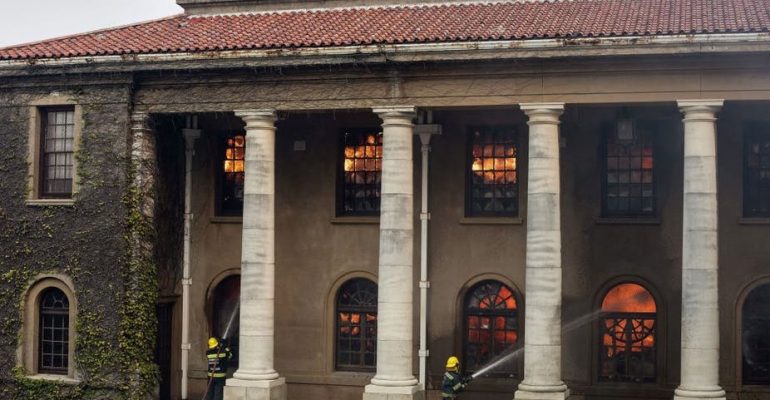 A wildfire on the slopes of South Africa’s Table Mountain has wreaked havoc at the University of Cape Town (UCT) campus. Among the sites of historical significance that have been damaged is the Jagger Library. The library houses rare and specialist collections, such as the important African Studies collections. The Conversation Africa’s Nontobeko Mtshali asked UCT academic Shannon Morreira to share her insights on what the loss means for the historical records held by the university.

Why is the African Studies Book Collection so significant?

When news broke that the Jagger Library was burning, scholars across my social media feeds responded with a visceral sense of horror and loss. One colleague of mine wrote that it felt like they had lost a family member.

It is not clear at this stage what has been lost as a result of the fire. But the burning of any part of a library – an archive – is such a terrible thing because you lose voices from the past which may carry alternative histories. This has particularly significant implications for countries like South Africa with fraught and contested histories. And whose histories have, for centuries, been told from a particular vantage point.

It’s this that has driven attempts to decolonise the curricula at various higher education institutions.

Decolonising is a hard term to define as it relates to knowledge and curricula. But one core idea that’s emerged is that different kinds of knowledge need to be valued.

The archive gave us access to knowledge that had been historically undervalued.

The African Studies collection consists of an astonishing collection of works related to Africa. These range from works published from as long ago as the 1500s through to the present day. It contains work in multiple indigenous and non-indigenous languages, and multiple formats: newspapers, maps, anti-apartheid works, activist pamphlets, graduate theses, film and audio.

Many of the works are also stored in digital format, but not all. The director of University of Cape Town Libraries, Ujala Satgoor, has confirmed that some valuable collections have been lost but that the fire detection system in the building triggered the fire shutters and many works were saved.

The Jagger Reading Room is a space familiar to generations of African Studies scholars, from the University of Cape Town and beyond. It was a place of quiet, where you could sit, surrounded by generations’ worth of thinking, writing, films.

I have recently been involved in a project that shows the valuable work the archive can do. Before lockdown in 2020, I was spending many hours a day in the Jagger Library, analysing the hard copy archive of the journal Anthropology Southern Africa, for an article (yet to be published) I was writing for the Council for Development of Social Science Research in Africa on the ways in which knowledge about southern Africa was made and valued over time.

Having access to this archive allowed for reflection on what histories and kinds of knowledge were valued in the past, and what was left out.

My colleagues have many other examples of the careful work that can be done with the treasures such a collection holds. The archive of African thought that’s been assembled has allowed a host of decolonial responses to emerge within African Studies.

What issues has the fire raised about holding archive material?

Archives matter to decolonising higher education because of the histories they afford us to embrace. Universities are not the only place that house archives, but they are often places that bring together multiple texts, images and voices to be housed under one roof.

With the shift to the digital age, many works are of course also stored digitally.

The bigger question is whether the higher education sector should be archiving materials.

In my opinion, of course it should. The collection of historical and present knowledge is one of the core tasks of the university. And space like a reading room brings scholars together to think and act with each other and with our textual histories. Archives also allow us to recognise actors outside the university as makers of legitimate knowledge that needs to be valued and stored.

But there needs to be a much more acute recognition of the knowledge that lies outside universities within communities. The national decolonisation project is pushing for this.

What lessons have been learnt?

I think the lessons are not new. They are things we already know and reflect work that is ongoing.

But it’s probably worth mentioning three.

One, while hard copies matter, the project of digitalisation that every university library in the world has been engaged in for quite some time is hugely valuable, and should be well-funded.

Two, the ways in which we treat our planet matter to the decolonising project, as they do to absolutely every project we have. Globally, we have seen a massive increase in fires, floods, droughts and other climate change related phenomena that put everything at risk, not just the libraries. A broad project of decolonisation accepts that the current status quo is not sustainable, and we need new (or old) knowledges to be brought into play.

Three, while university archives are of course not the only places where knowledge is made or stored, losing them is nevertheless devastating.

IGCSE Geography Past Papers for 2019

Mathematics Grade 12 Past Papers and Memos for 2021 CAPS